The Czech Republic 30 Years Since the Velvet Revolution 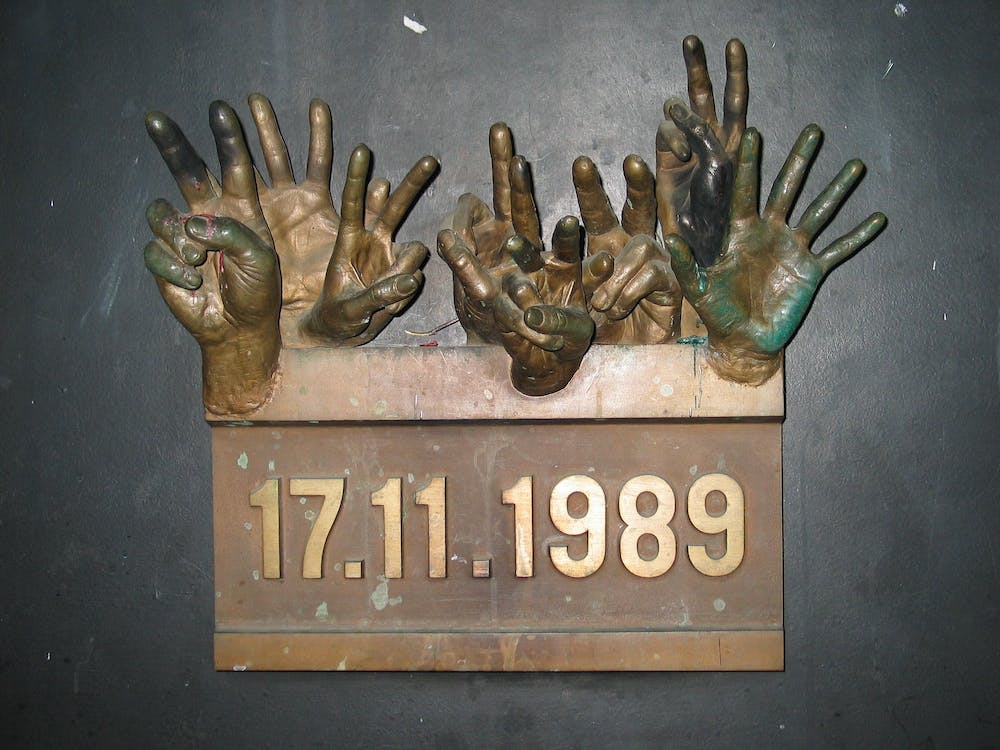 Symbols and their evolution can give us great insight into the organization, religion, or region that uses them. A good symbol can tell the story of  a group. The cross in Christianity certainly tells a story. The three colours of the Czech flag also  have meaning. White for the people, their honesty and peacefulness. The red for courage and patriotism and the blue to symbolize loyalty, truth and perseverance. 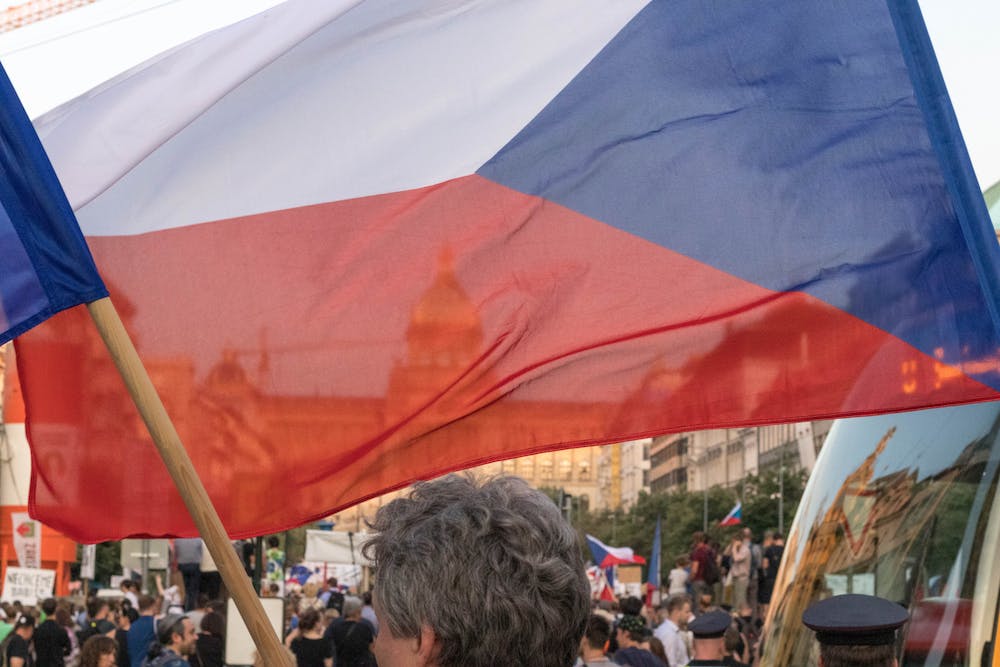 One of the most important symbols in Prague would be the plinth, or base on Letna park hill overlooking Prague. Originally it held the largest statue of Joseph Stalin in the world. Unveiled in May of 1955 this statue towered over the city. Taking 5 ½ years to build the ominous presence of this massive structure would have reflected the oppressive feelings the Czechs had under the communist regime. But, as the Czech society moved towards a less rigid form of the regime called “Socialism with a Human Face,” in 1962 the statue was destroyed needing over 800 kilograms (1800 lbs) of explosives.  The destruction of the statue cost about as much as it cost to create. The empty base remained for years and I can see that, in itself, it could have been an image of life as it was. 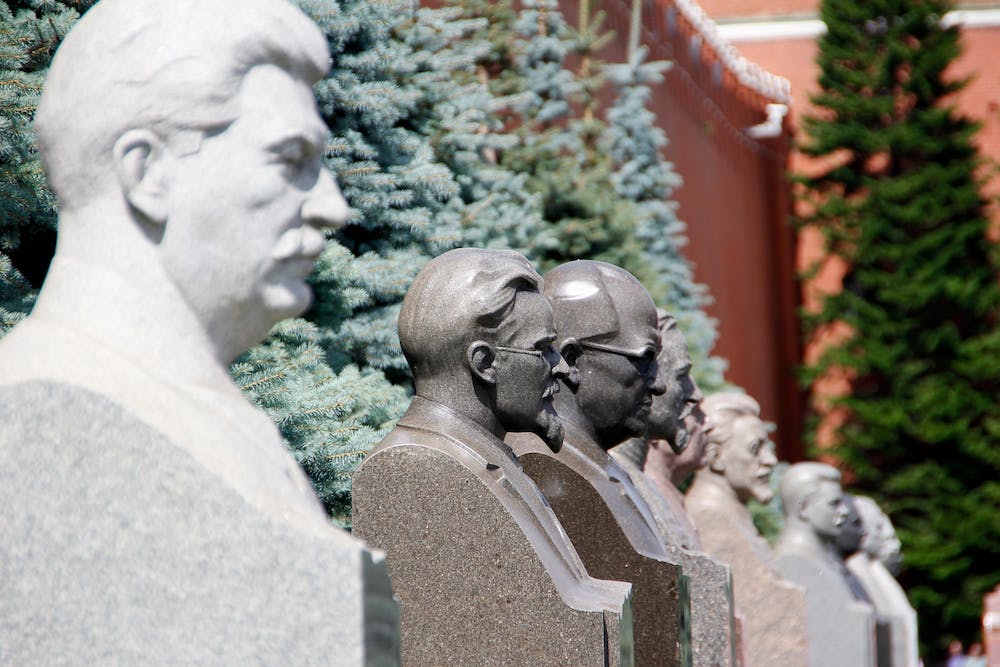 In 1989 the Czechs would finally be free from the yoke of communism and in 1991 a large metronome was placed on the base to symbolize the passing of time, the good times and the bad times. 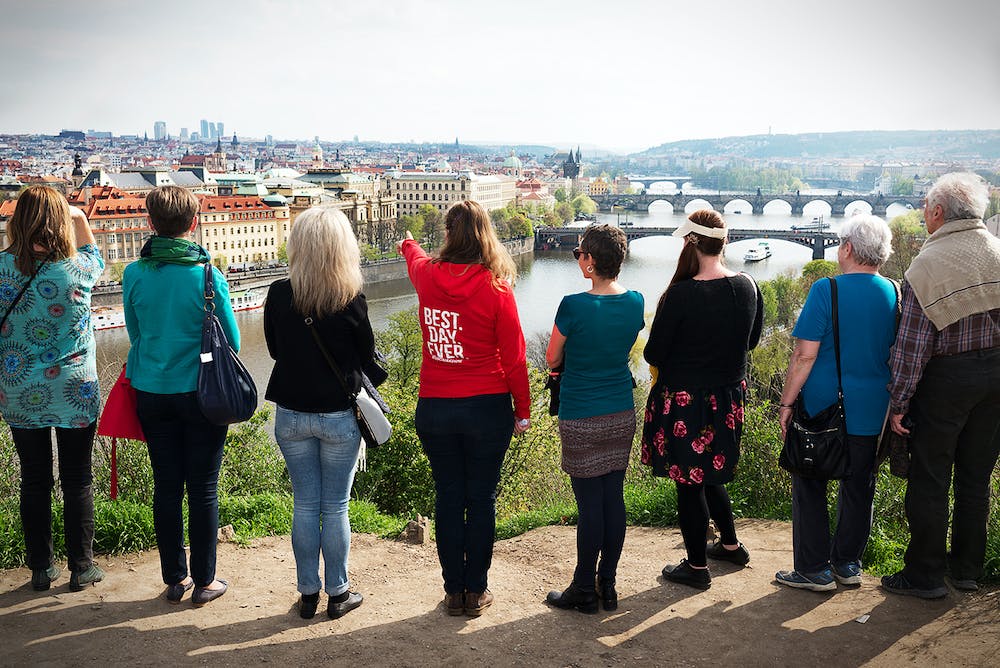 The magnificent view from Letná park, where the metronome still stands

The Velvet Revolution was an iconic moment and its symbols can be seen from the metronome itself, the Memorial to the Victims of Communism( Újezd 420, 118 00 Malá Strana), the John Lennon Wall (Velkopřevorské náměstí, 100 00 Praha 1), the Velvet Revolution Memorial (Národní 110 00,  Praha-Nové Město) and many other locations throughout the city. Also, this year you can check out the free photo exhibiton about the Velvet Revolution which takes place in the centre of Prague (along the pedestrian zone of Na Příkopě street). 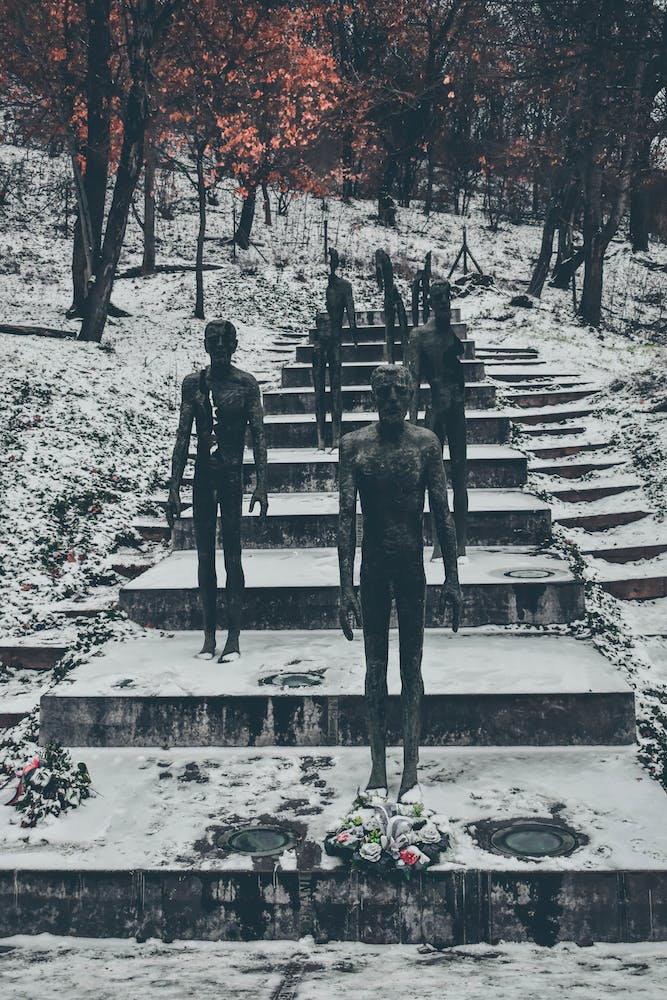 The Memorial to the Victims of Communism

Moments in history are often memorialized, those who worked to make a moment happen are often honored and remembered, but the hard work after that moment is almost never mentioned. No one builds a statue to the person with a mop. We can find photos of the masses of people in Wenceslas Square protesting,but it’s hard to find photos of people in meetings trying to set the systems into place to take the country from communism to democracy. 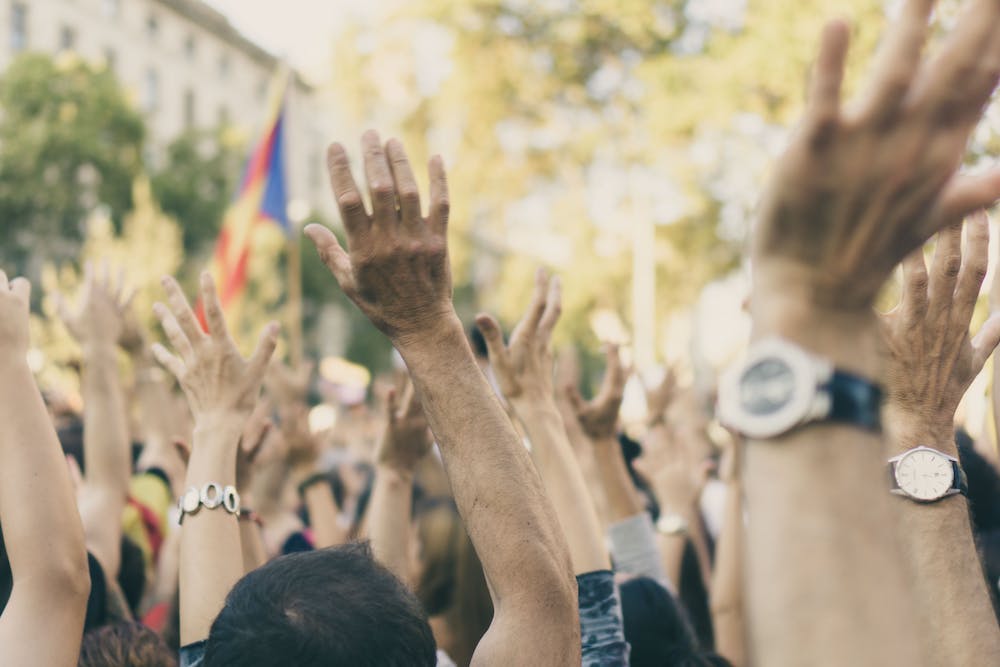 The problems of redistributing property the regime had taken, merging the economy to align with a more capitalistic thinking and creating trade were all difficult but necessary changes that needed to be made. There are no peeks or valleys, just meticulous effort. What this effort achieved is as important as the Velvet Revolution itself.

The first noticeable major change occurs in 1993. In January the country of Czechoslovakia ceased to exist. With the “glue” of communism no longer forcing the two peoples together a division began to form between the Czech and Slovak ideas of moving forward. The government had become top heavy with each region having their own set of politicians. There were two of almost every position including prime ministers. If one set of politicians can’t get much done imagine two sets. In 1992 both sides agreed to peacefully separate and on January 1st, 1993 this event, known as the Velvet Divorce, took place. Each country would follow its own, somewhat parallel, path. 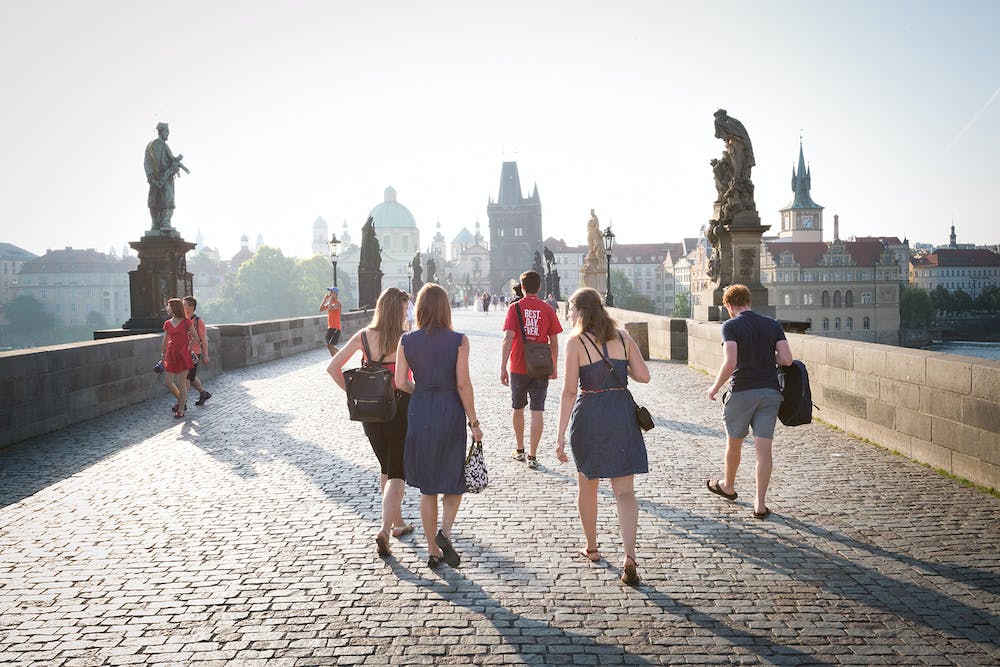 Before the Revolution most imports came from the Soviet Union, afterwards changes had to be made to look west instead of east. This created an investment culture bringing money in from western Europe and the US. This was so successful that the Czech Republic is the first post-communistic country to earn an investment grade credit rating by many international institutes.

In 1999 The Czech Republic joined NATO and in 2004 it joined the EU. Very quickly the country became thriving nation. The growth from 1989 to today is amazing and, for the most part, continues on an upward curve of prosperity.

In the 1920’s Czechoslovakia was ranked 10th in manufactured exports in the world and through the 1990s the Czech Republic began to improve their plants and create a far better product of machinery than what had been available under communism. Today 80% of all exports are transportation; automobiles, trains and so forth. The focus on jobs in this country has created one of the lowest employment rates in Europe. Though this transformation was not always smooth, in 1997 there was a near collapse in their economical structure. Two plans, simply known as “The Packages” slowed government spending and increased investment in the country helping pull the economy back from possible dissaster.

The early 2000s showed more growth in both exports and domestic product and even the credit crisis in 2007 did little to damage the economy. Not all is roses as in 2010 there was a dip in the economic situation. Some blame political moves, others, a decrease in domestic needs. What ever the cause this had an effect on the economy.  Since that phase the country is again looking up with an increase in exports and one might add, an increase in the tourist trade. 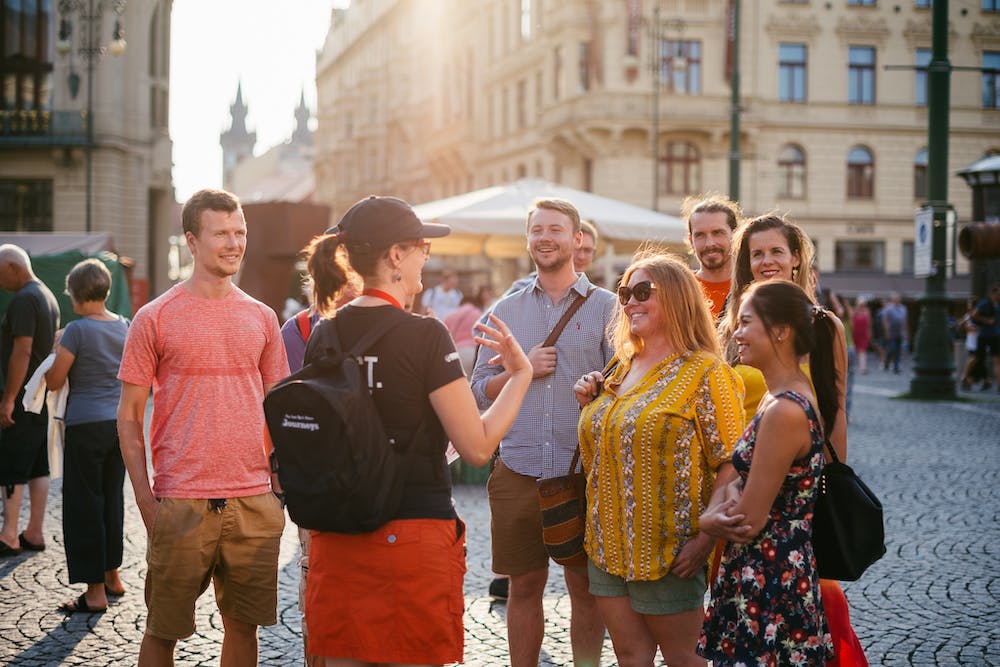 Even with all this good news many Czechs are still disillusioned with their county, or at least their government. There certainly are issues, the country has had 12 Prime Ministers since 1992. There is have been corrupt politicians many who have injured the country with their actions.  A poll taken 25 years after the Revolution show that only 61% of the country view the events of 1989 in a positive light. A full 12% would prefer life as it was before 1989. This in not to say that they do not enjoy greater freedoms, access to information and the ability to travel and work in other countries. Where the problem lies is in their views of the political process where a number of businessmen and politicians have profited illegally from the disorganization during the change in the 90s. They also feel very little equality in the legal and justice systems. There certainly are problems that need sorting out.

Even so, employment opportunities continue to expand , Czech export products are considered quality products and the country, being the crossroads of the east and west, has become a prime business location for many international corporations. 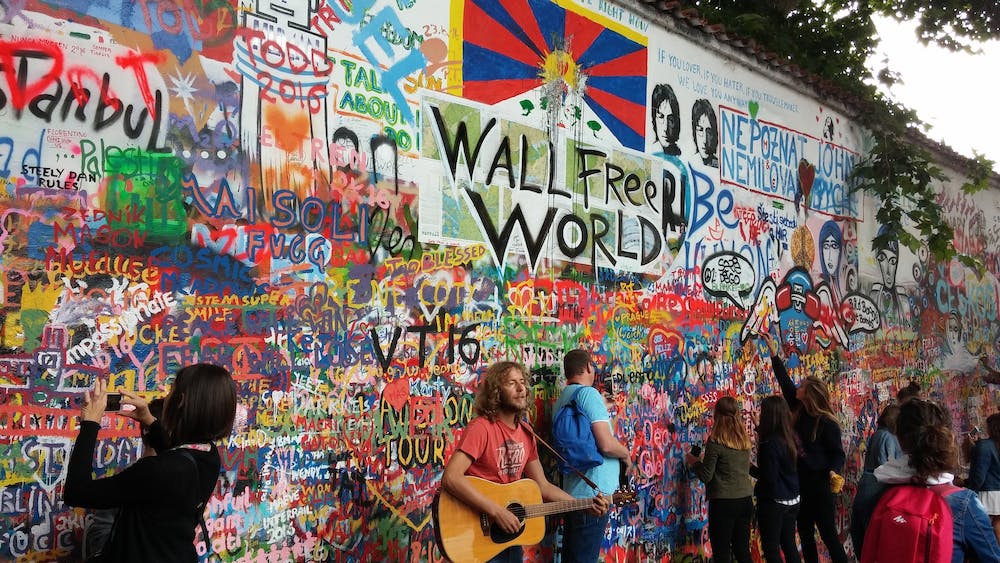 The metronome on Letna hill at times stops working. Sometimes it takes weeks before it is moving again, but just like the people it represents, any problem will be fixed and once again it will be moving back and forth, marking out the time as the Czechs move forward with their country.

You can learn much more about these locations on our Prague Discovery tour.