The Story of Jan Palach, the Human Torch Against the Soviet Occupation 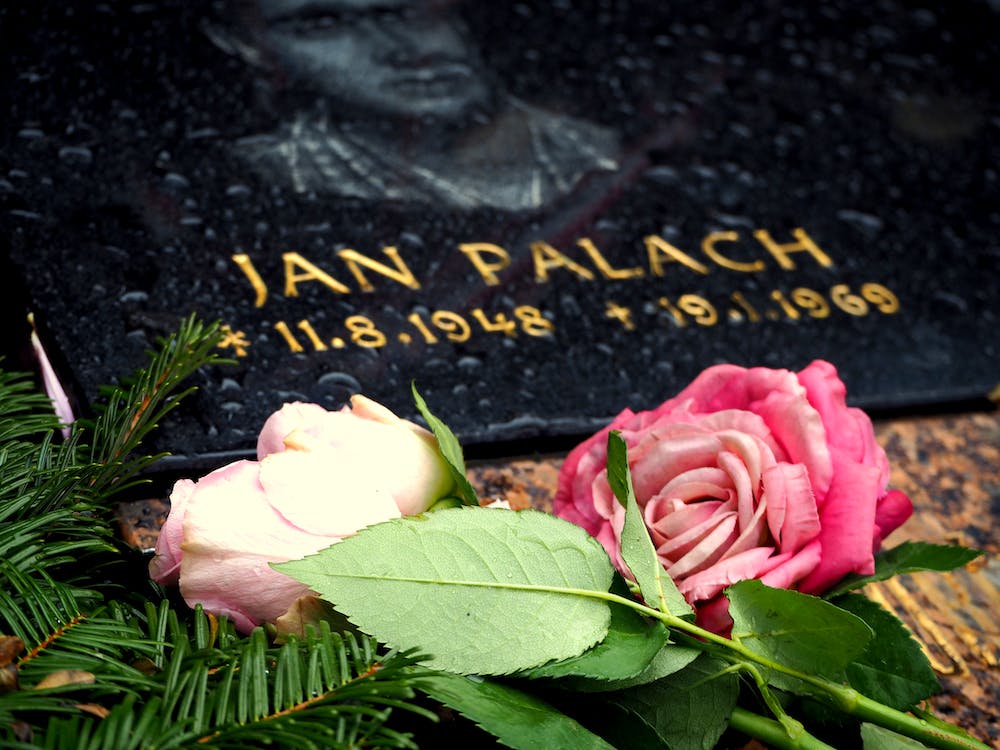 “He died because he wanted to shout as loud as possible. He wanted us to realize what was happening to us…”

In 1968 Czechoslovakia was pursuing changes in the communist government under the guidance of the newly elected Alexander Dubček. This hopeful, but short lived, attempt was erased with the military takeover by the Soviet Union plunging the country into subjugation and depression. The hope of more liberal reforms and freedoms were shattered on the 20th of August 1968 under the boots of 60,000 troops.  It would take another twenty years before the Czechs would finally control their country. This was known as Prague Spring. 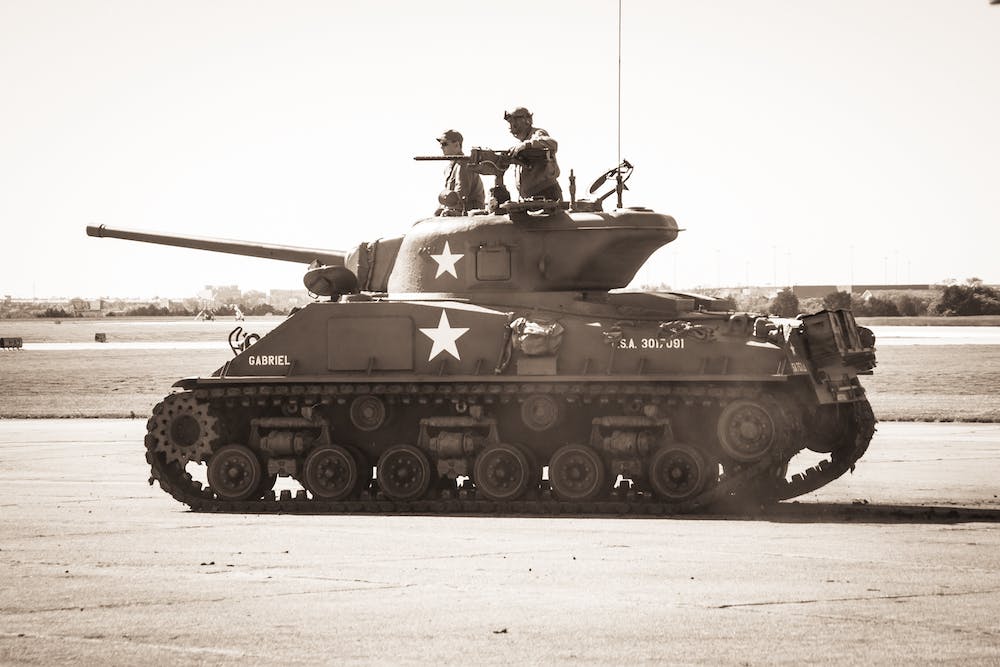 Students are always at the front of a revolution and it was no different then. Having a bit of hope destroyed so quickly created a backlash from students. Protests, graffiti and even direct confrontation were all part of the reaction.  One man, however, would react in such a manner as to have a lasting effect decades after his passing.

Jan Palach had a fairly standard childhood. His parents had been confectioners until the start of the 1950’s. After having to close their shop due to the communist government his parents found mostly blue-collar work. In 1962 his father passed due to a heart attack leaving him alone with his mother. His older brother had moved out a few years earlier. He graduated secondary school in 1966. For the outsider this seems like a normal life, his father dying is certainly a tragedy but nothing in his first 18 years of life portended his actions later. 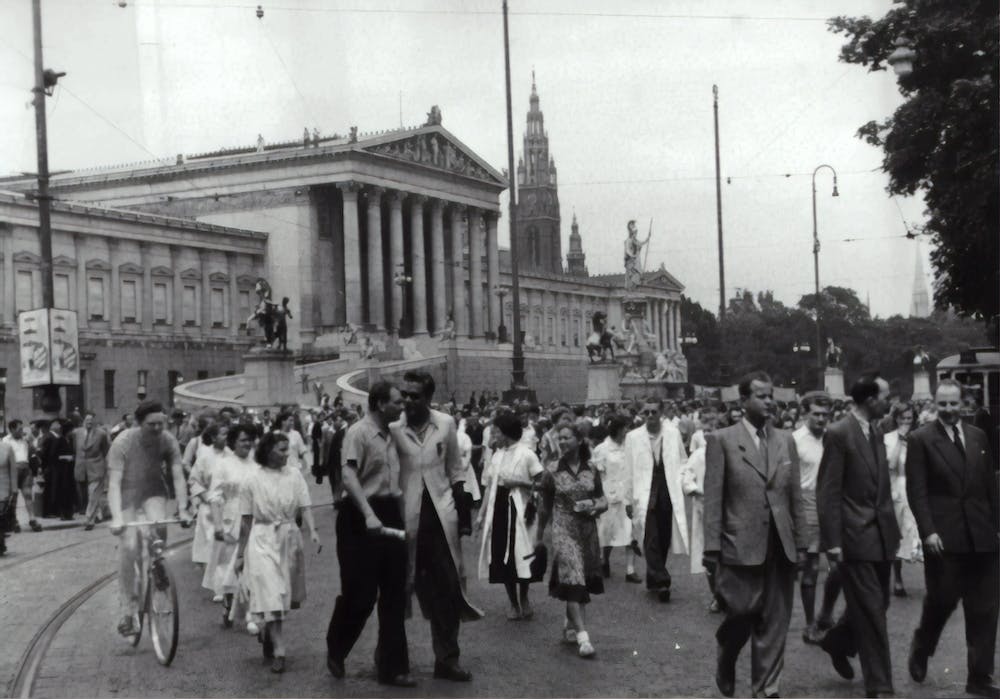 His time at Charles University was a productive and busy time.

Jan had applied for admission into the Faculty of Arts at Charles University but there were a number of applicants and his was not accepted. Instead he attended the University of Economics at Charles University.  He seemed to be quite active organizing student groups to Kazakhstan and Leningrad and also helped form the Academic Council of Students at the University of Economics. In the spring of 1968 he was fully involved with a number of meetings about the social change the country seemed to be going through. This was an exciting time.

Most of his summer was spent on a trip to the Soviet Union and great news was waiting for him when he returned on August 17th. His transfer to the Faculty of Arts was accepted. Four days later he would experience the Warsaw Pact Nations take over his country. He traveled to Prague for a few days then returned home. There he was involved in the protest against this invasion. In October he was able to visit France as a reward for organizing a work trip to the Soviet Union. He returned on October 19th, the day after the National Assembly approved the deployment of Russian troops. He enrolled to the Faculty of Arts at the end of October.

His friends would later state that he took part in a number of protests including an occupational strike in November that failed. They would add that this seemed to be a turning point in his life. He had been planning various forms of protest including occupying the building of Czechoslovakia Radio to call for a general strike.  These plans were sent to Lubomír Holeček, a student leader helping to organize a number of protests. Jan never heard a reply. At this point he decided on a more extreme form of protest. 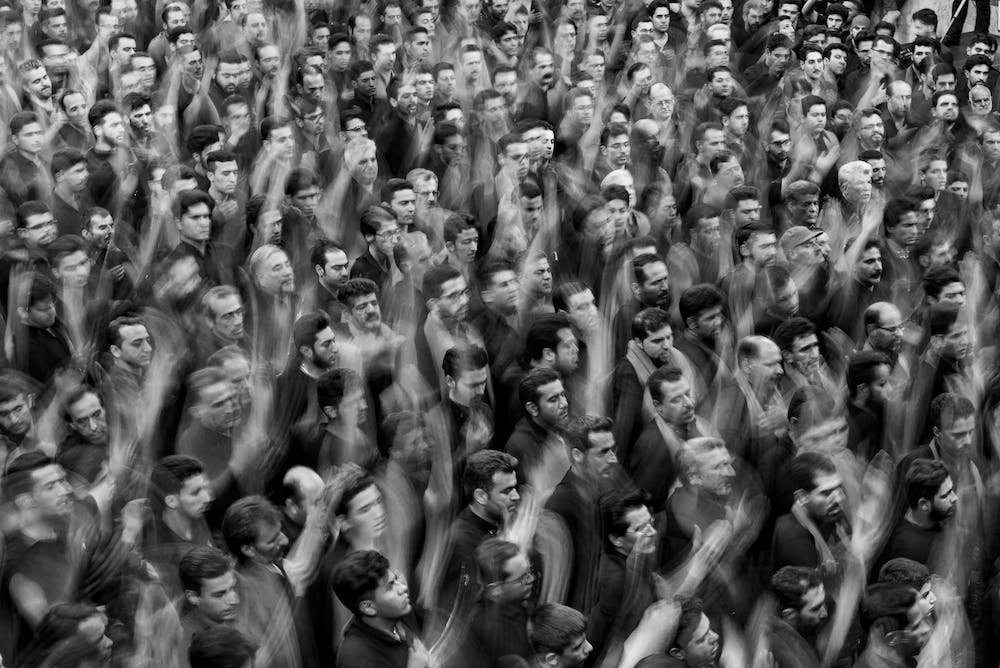 On January 15th, 1969 he attended the funeral of his uncle. He would have arrived sometime around 8 in the morning. It is believed he made 4 copies of a letter he wrote sending one copy to a friend, another to the student leader Holeček and one to the Union of Czechoslovakian writers. The final one he kept for later storing it in his briefcase. He left his dorm room around 11am. The following hours he would post his letters, purchase two plastic bottles and then fill them with petrol. He arrived at the top of Wenceslaus Square around 2:30pm. He selected this location due to the large number of people in this center of town. 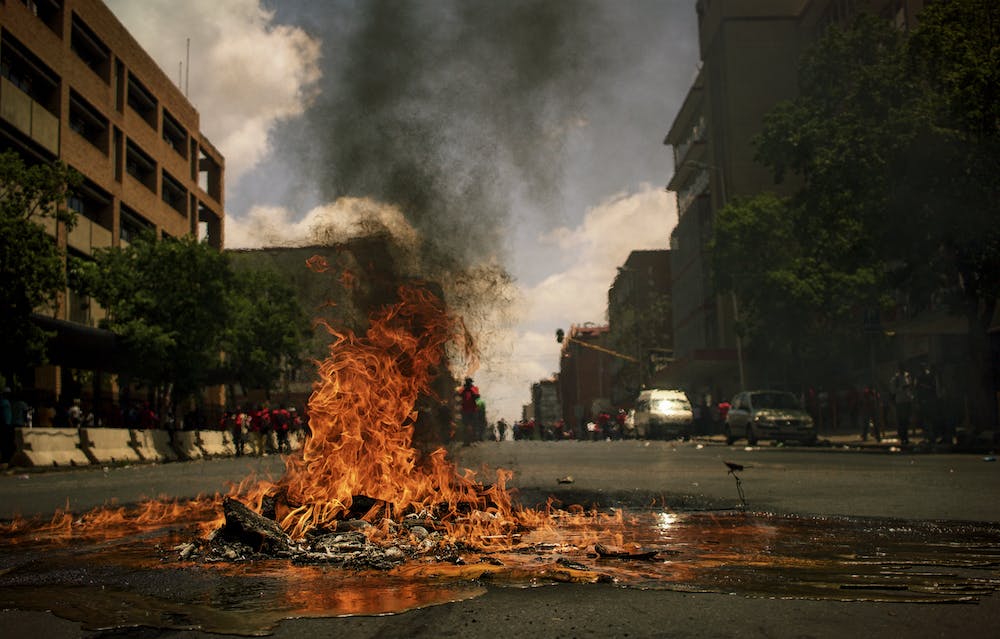 Eyewitnesses stated that he took one bottle, opened it with a knife and then poured it over himself and lit himself on fire. At that point he ran down the square. When he fell, he was quickly put out by people nearby. Even at that point he was able to tell them to get his briefcase which had his letter inside. In this letter he claimed to be a member of a small group who would set themselves on fire for the cause. Since he was the first he took the title “Human torch No. 1”. The demands were to stop censorship and stop publishing the communist propaganda paper Zprávy. He went on to say that if these measures were not met by the 21st of the month then there would be more human torches. 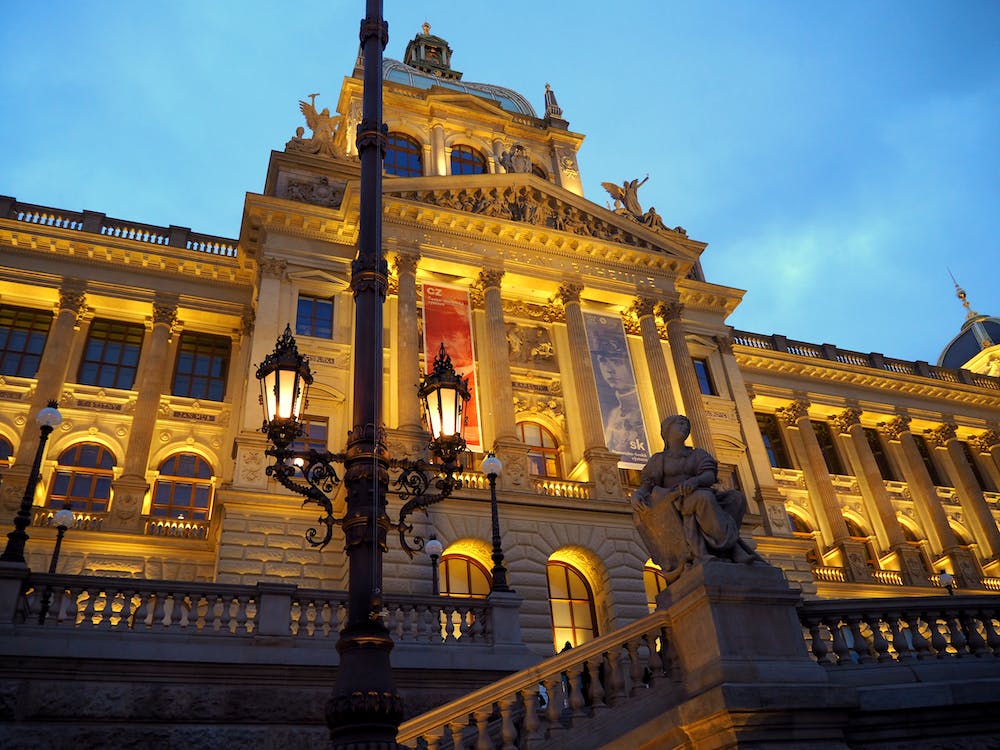 He would survive for 3 days with second and third degree burns on 85% of his body. There would be some controversy over his final statements. Due to the number of both reporters and police his doctor closed his area off allowing only his mother and brother to see him. She even held off the police though she did take a recorder for any statement he made. Nothing was ever recorded on that machine. At 3:30pm, January 19th Jan Palach passed away.

The repercussions ranged from outage to outlandish. One government leader claimed that he did not purposefully set himself on fire but claimed he thought it was “cold fire” that Jan had used and it accidentally set him on fire. Since such a product does not exist this would seem laughable, but the government was trying every way possible to make him appear as a madman or a victim of the student movement. There would be protests and hunger strikes throughout Czechoslovakia including one at the location he lit himself on fire. It is believed Jan Zajíc, an 18-year-old student, followed Palach’s example and burned himself in Wenceslaus Square a month later. A few other would commit self-emulation in Czechoslovakia as well as Poland in protest of the regime but eventually the protests were stifled. 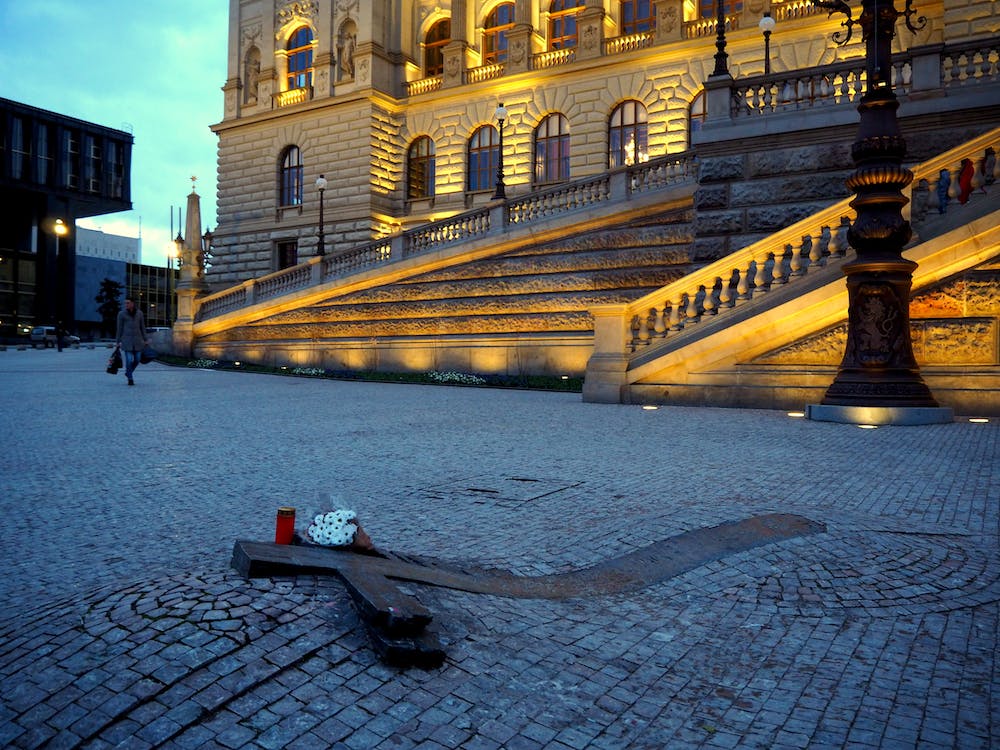 Jan Palach’s memorial in front of the National Museum

Twenty years later the largest protest against the regime would happen during a week dedicated to his memory. This protest seemed to be, in some ways, a catalysis for the year of rebelling that would culminate in the victory of the Velvet Revolution.

Today there are a number of sites dedicated to his memory. At the top of Wenceslaus in front of the museum is a marker where Jan started the fire. About 20 meters in front of the Wenceslas statue is a place marker to both young men with their images. In Jan Palach Square attached to one of the buildings of Charles University is his death mask.

If you want to find out more about his life, check out this recent Czech film.

He is certainly mentioned on our Prague Discovery tours but any of our guides will be happy to fill you in on his life.