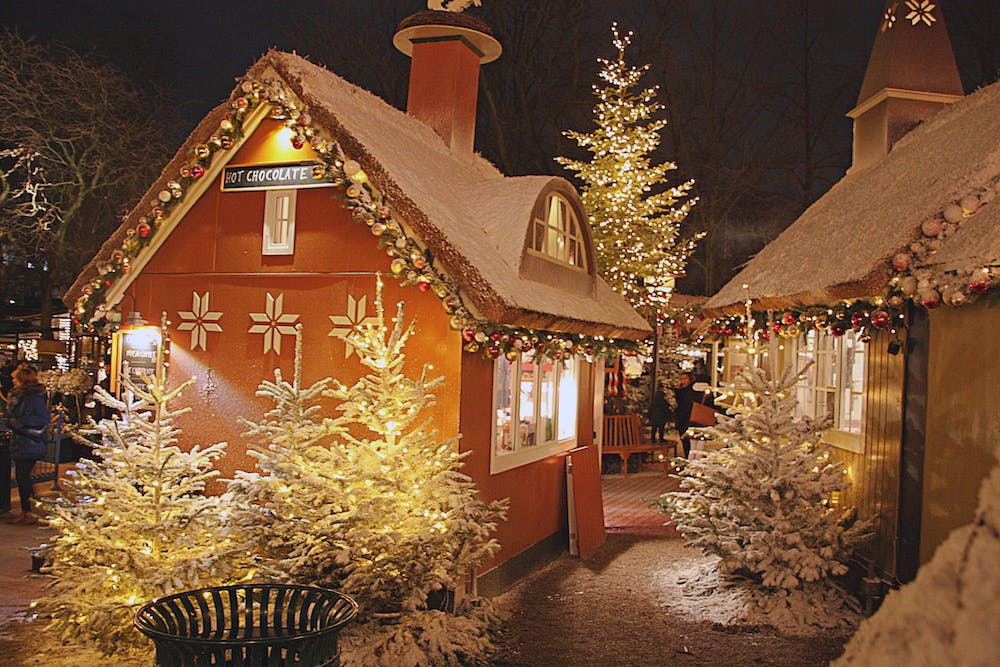 Christmas takes a lot of preparation. Czech people  are crazy about tidying up for this occasion. Christmas cleaning is actually a special term in our language. It involves cleaning everything you come across at your place, including windows, no matter the weather. Even if it is freezing outside, this just needs to get done. Your mother-in-law is going to visit and she WILL notice!

Christmas Eve is the most important day of the whole season for us. We start with breakfast, although some people choose to skip it, for the saying goes that if you fast until dinner, you will get to see the golden pig – a symbol of future wealth and prosperity. (Or you might also see it in the forest while stealing a Christmas tree, as the famous Czech commercial has it.) Either way, it is quite a challenge with all the goodies around. For those who are weak like me, there is a delicious breakfast in the form of homemade vánočka (if you want to learn more about this traditional delight, see our previous article). Then we need to hurry up, bring the Christmas tree into the living room, take out all the decorations, and hang them on the tree. This is actually one of the traditions that don’t go that far back. The first Christmas tree in Prague was decorated in 1812 but it took a couple more years for this habit to spread around. And yes, there are still people who decorate the tree on Christmas Eve and not in early December.

Czechs love watching fairy tales or comedy films on TV and that is precisely what we do most of the time over the Christmas break. The most popular fairy tale for this season is definitely Tři oříšky pro Popelku, the Czech version of Cinderella. It was made in co-production with East Germany in 1973 and you can watch it on Christmas Eve each year. Apart from that, there is also always one brand new fairy tale on the Czech Television channel. In 2017, it was Anděl Páně 2 (The Angel of the Lord 2, check out the trailer here). The movie had actually been released the preceding year and in just one month it had become the most frequently visited movie in Czech cinemas for the last couple of years. This is how much we love fairy tales! There are always the most popular actors in our fairy tales and this was no exception.

The lunch menu differs from region to region. One possibility is the spiral-shaped vinná klobása (wine sausage) on a skewer. You can bread and deep-fry it, or dust with flour and fry in a pan. The healthiest version would be to roast in the oven. Whichever method you choose, wine sausages are super yummy, especially with boiled potatoes and mustard. Kuba would be another option for a Christmas lunch. It is a very simple meal of boiled and peeled barley, carrots, dark mushrooms, fried onions, marjoram, and garlic. We mix everything together and put it in the oven for about 40 minutes.

The afternoon is often dedicated to various kinds of traditions. My family’s favourite is making boats out of walnut shells. Each family member puts a candle inside the shell and places the boat into a water basin. Light the candles, switch off the lights, and see what happens. If the boats stick together, it means there are strong ties within your family circle. If your boat is going straight ahead to the other side, you know what you want in your life. In fact, this activity is open to various interpretations, but the worst thing that can happen is when the boat sinks… oh-oh!

We also cut an apple in half and see if there is a star. If so, good health is in store for us. A worm foretells complications, and guess what a cross means! Well, you should know that Czech traditions can be quite cruel in their forecastings…

Pouring of lead is another activity that requires some imagination. You will need a stove or a candle, little pan (which you will NOT use for anything else ever again), and some lead. In order to melt it, you have to heat it to 327 °C (621° F). Once it melts, pour it into a bowl of cold water. Take it out and turn your imagination on full speed. Every shape has some kind of meaning. My daughter saw a bush in her lead, which implies a lot of money for the next year. Check out this short video clip from a popular Czech movie to get a better idea of what’s up with the lead. Just don’t forget to give your hands a good wash afterward – lead is toxic!

If you are still single, you might be curious whether there is any marriage for you next year. Throw a shoe over your shoulder towards the main door and if the tip of the shoe is pointing towards the door, it means you will get married!

Who brings the Christmas presents?

Santa is a bit lazy to come all the way here, so we have Ježíšek (Baby Jesus) instead. In the 1950s, the Czechoslovak communist leaders were unsuccessfully trying to convince people that Baby Jesus had grown up and turned into Grandpa Frost (the Russian Santa Claus). They wanted to get rid of all Christmas traditions with religious bases and replace them with something more eastern. Stalin, their living icon, had his birthday on the 21st of December, so why not to go in this direction. In 1949, Stalin’s face was staring at people from the front page of all magazines. There was even a birthday-gift collection for him in many factories. The communists were striving for a pro-eastern revolution of Christmas for years, but eventually, they had to give up. That’s how we kept our Ježíšek.

And what does this Ježíšek look like? Well, that depends. If you ask 10 children this same question, you will get 10 different answers. Everybody has their own Ježíšek in mind, for no one has ever seen him in person. What a sneaky gift messenger that is!

The critical part of the day comes right after dinner. While one parent takes the children into their room to wait for Ježíšek, the other needs to arrange all the presents under the Christmas tree. A top level of coordination is required for this mission! Once the jingle bell announces Ježíšek’s arrival, the children rush out to catch him in the act of bringing presents. But Ježíšek is already gone and what remains is to discover all the new toys and play with them alongside the fairy tales on TV. A lot of Czechs finish the day with Midnight Mass. For most of them, Christmas is the only time of the year they go to church.

Activities for the rest of the season

The 25 and 26 December is usually spent by visiting other family members, going for walks, or exploring the Christmas markets. If you would like to have a similar experience, try our Prague’s Merry Markets Christmas Tour. Our guides will not only help you navigate through the treasures on offer but also broaden your knowledge of Czech Christmas traditions with personal testimony.

Most people take a vacation until 2 January, so that they can enjoy some winter sports as well. The highest mountain in the Czech Republic is in the north, about 2 hours from Prague. You can rent skis, snowboards, or cross-country skis in all local resorts for very reasonable prices. An alternative for those who stay in the city is ice skating. This sport is quite popular here and you will find opportunities to try it all over the city, even in the very city center. One of these is traditionally in Ovocný Trh, next to the Estates Theatre. If the weather allows, you can enjoy ice skating all the way until February.

Christmas is also the time when beautiful nativity scenes take over the city, not only in churches. There is a couple of exhibitions dedicated to these in Prague, for example in the Charles Bridge Museum. You can find nativity scenes of all ages and materials. The most beautiful one in Prague is located in the Church of Our Lady of the Angels, a part of the Capuchin Monastery just a few minutes from the Prague Castle. The life-sized figures were made by one of the Capuchin brothers in the 18th century. The monastery itself was exposed to serious danger many times throughout its history, so it is a real miracle it survived all those different wars and alternating regimes.

There is not much difference between New Year’s Eve here and anywhere else – lots of parties with good food, alcohol, and fireworks all around. And a great hangover for the next day, of course! What we usually prepare for parties throughout the year are open-faced sandwiches. You can try these in many Prague’s bakeries and cafés, such as Zlatý Kříž Deli, Ovocný Světozor, or Špejle.

For lunch, people often eat green lentils. They look like tiny coins and thus form another Czech tradition for hoarding money. Don’t forget to hide one dried lentil inside your purse to secure great wealth for the next year!

The 2nd of January is the day when everybody needs to go back to school or work. But the Christmas season is not over until the Three Wise Men Day on the 6th of January. Children from the neighbourhood dress up as the biblical Magi (one of them should be black, which is often solved by dark face-paint) and sing Christmas carols house to house. They finish the performance by wishing good luck and a long life, for which they are rewarded with treats. As a sign of appreciation, they write “K + M + B 2019” (the initial letters of the wise men’s names) with a chalk above the door. If nothing else, it gives everyone a good excuse not to wash the door for some time, until the inscription is washed off by the rain.

The 6th of January is also the day to remove all Christmas decorations and the Christmas tree. For the next few days, you will come across spruces lying next to garbage cans all over the city. This is the last Christmas thrill and from then on, you might start looking forward to the next year’s season.