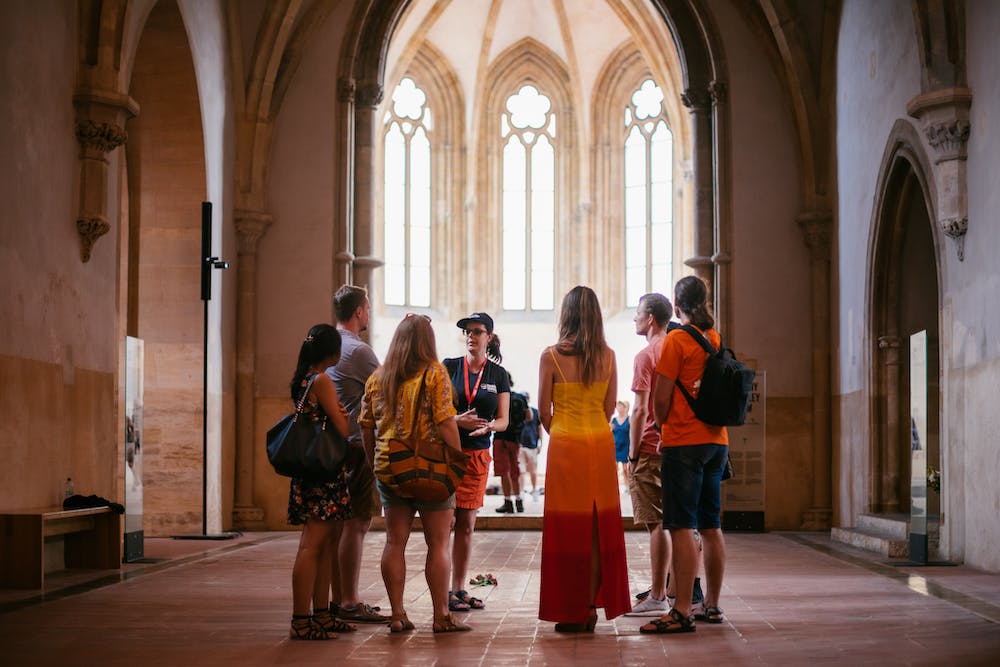 Have you ever heard of the convent of Saint Agnes in Prague? No, you haven’t! And guess what, other tourists haven’t either. While crowds of them throng in the Old Town Square, there are these unheard-of places in Prague that will simply take your breath away. Anežský klášter is one of them and it offers a great sightseeing experience even without the necessity of pushing aside tons of other eager visitors. And it is an absolute must for those who like to include some art in their travels. But don’t get me wrong, I’m not saying you should skip the glorious tourist attractions in favor of this one. However, tourism in Prague is rather busy nowadays and you might feel the need for some quiet spot in the midst of all that buzz. In that case, this monastery might be the right thing for you.

Situated on the eastern bank of the Vltava river, the convent of Saint Agnes represents one of the oldest gothic buildings in Prague. It is named after its founder, princess Agnes of Bohemia from the Přemyslid dynasty. The extensive complex encompasses the Church of Saint Francis and its presbytery, a cloister, several convent buildings, a chapel, beautiful gardens, and a lapidarium. It was declared a national cultural heritage in 1970. Today, the convent serves the purposes of the National Gallery, hosting various exhibitions, workshops, and cultural events.

One way of exploring this magical place is by joining our brand new tour Story of Prague: Remarkable Architecture & Food. Operated in partnership with the New York Times, this tour takes you directly within the walls of the complex and uncovers all the mysteries behind its construction.

A piece of history

Agnes of Bohemia was an extraordinary person whose influence reached far beyond the borders of the Czech lands. With the help of the royal family, Agnes established the convent and became its spiritual leader. The site originally consisted of a larger monastery of Poor Clares and a somewhat less eminent monastery of Friars Minor, which later disappeared. It was an important spiritual center at that time as well as the Premyslid burial ground. However, after the death of its founder, the period of its prosperity ended and the significance of the monastery gradually declined. The monastery was abolished in January 1782 and transformed into workshops, warehouses, and apartments for the poor. It was redeemed and partially restored by the efforts of the Union for the Restoration of the Convent. Since 1963 it has been under extensive reconstruction for the purposes of the National Gallery.

The National Gallery hosts a permanent exhibition on the premises of the convent as well as various temporary expositions. These are open from Tuesday to Sunday 10 am – 6 pm and on Wednesday until 8 pm. There is an admission fee of 200 CZK for adults and 120 CZK for seniors 65+. The admission for children under 18 and students under 26 is free of charge. At this moment, there are objects of medieval art on display. Together with the workshops, self-guided tours, and occasional cultural events, it is definitely worth visiting.

If you are not interested in the exhibition but would like to visit the complex nevertheless, the gardens are freely accessible every day. In the summer they are open 10 am – 10 pm (on the weekend until midnight) and from October to March 10 am – 6 pm. Thanks to a recent reconstruction, the whole complex is wheelchair accessible.

Things to do within

The permanent exhibition is located on the first floor of the monastery and it presents over 200 exhibits, including paintings, sculptures, and other objects of artistic craft. The items on display reflect the transformations of form and function of art over the course of three centuries. Most of the exhibits have their origin in the Czech lands with a few artworks from the surrounding historical regions of Franconia, Saxony, and Austria. Among the real treasures of the exhibition are objects made during the rule of the Luxembourg dynasty and the upswing of the Czech lands under the Jagiellonian dynasty.

Prague used to be one of the leading European art centers in the past. While the 14th century witnessed a heavy focus on traditional Czech craft, from the 15th century on external influence started to shape our artistic production. Due to the frequent cultural encounters in this period, Bohemian art shows signs of other regional craft of Central Europe. The newly conceived exhibition reveals this development of artistic craft in the Czech lands by presenting some of the gems of both domestic and international production.

In October 2016, a new sightseeing route through the complex was opened in the ground floor, that features the most important exhibit – the monastery itself. The route offers an opportunity for a self-guided tour through the historical buildings, their gardens, and the adjacent lapidarium. The focus of the tour is the architectonic style of the covenant in relation to its location and historical context. Don’t miss this unique chance to soak up the authentic atmosphere of the monastery. Wandering among the individual buildings gives you the feeling of travelling back in time. There is also a separate circuit for younger visitors, which includes interactive games and other educational activities. Together with the art workshop at the end of the tour, it turns this extraordinary kind of exhibition into a family-friendly environment.

There are exhibits in the yards of the convent as well as inside. Apart from the architecture, the visitors may also admire some of the most valuable artifacts found during the archeological investigations of the complex. These can be found in the lapidarium – a true paradise for all the history buffs among you! The tour is conducted with the help of handy leaflets for both children and adults, audio guides, and even a brand new smartphone app.

An integral part of the circuit is the renovated monastery garden. But these are not just any gardens! The whole place is adorned with nearly two dozen sculptures made by contemporary Czech artists, such as Aleš Veselý or Jaroslav Róna. One of the first sculptures of František Bílek, a famous Czech sculptor, also made its way into the garden. The artworks are surrounded by modern pieces of furniture, which allows the visitors to relax while admiring the sights. Even children will enjoy this part of the tour, for some of the objects in the garden are designed to engage their attention. As mentioned above, there is no admission fee to the gardens and you can thus experience this part of the convent even without the tour.

The best time to visit

To be honest, there is no bad time to visit the convent of Saint Agnes. Due to its combination of interior and exterior spaces, there are things to do in any kind of weather (the gardens are sometimes closed in the case of unfavourable conditions, but who would want to be outside during a storm anyway). However, different seasons offer different kinds of experience in the monastery and it is up to every individual visitor to decide what it is they seek.

Apart from the permanent and temporary exhibitions, various kinds of cultural events take place on the premises of the convent. While the winter time is relatively quiet in terms of public happenings, the autumn and spring are rich in concerts of classical music. If your stay in Prague coincides with any of these, definitely give it a try. There is nothing like listening to the grand tones of world-renowned composers in the historical environment of a cloister. Once the weather gets warmer and the days become longer, the quiet monastery turns into one of the liveliest spots in Prague.

Three months full of music, films, theatre performances, workshops, and exhibitions, that’s what summer means in the convent of Saint Agnes. Named after the founder of the convent herself, Anežka LIVE! is a summer festival that will change your opinion of monasteries once and forever. Beginning in the middle of may, the convent gardens hosts a rich cultural program with different events almost every single day. While the evenings are often devoted to concerts or film screenings, during the day you may experience lessons of yoga or participate in a public discussion.